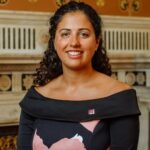 Dr. Lella Nouri is a Lecturer of Criminology at Swansea University, specialising in terrorist use of the internet. Lella’s background is interdisciplinary in nature; she studied for her PhD in Politics and her MA in International Relations. Lella’s recent research has focussed on the growing use of the internet by far-right extremist groups; currently she is leading an interdisciplinary team examining extreme far-right groups’ usage and influence on popular social media sites.

The Orfalea Center hosted Lella during the 2017/18 academic year, while she was the Fulbright Cyber Security Scholar .