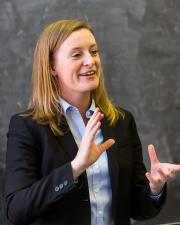 Join us for a colloquium by Dr. Susan Hyde, where she will be presenting on her paper “Reconsidering Regime Type in International Relations.” This colloquium is presented by the Global Security Research Hub.

Across several generations of scholarship in international relations, regime type has stood as the clearest and most dominant way to understand how domestic politics influences international behavior. But recent research across much of IR has muddied the regime type waters through more nuanced study of international behavior on both the authoritarian and democratic ends of the regime type spectrum, including authoritarian leaders who can become (temporarily) more exposed to domestic audiences, and democratic leaders who can (also temporarily) insulate themselves from public accountability. Although recent research obscures the traditional conclusions about how regime type “matters” in IR, we use this review essay to argue that new insights point to a more nuanced picture in which domestic institutions and the international environment interact to determine when leaders have “room for maneuver”—or the ability to engage in short term strategic action to become more insulated or exposed to relevant domestic audiences.

Susan D. Hyde is Professor of Political Science and Avice M. Saint Chair in Public Policy at the University of California, Berekeley. She is the Executive Director of the EGAP (Evidence in Governance and Politics) research network. Her research examines attempts by international actors to change politics or policies within sovereign states, particularly in the developing world. She earned her Ph.D. from the University of California, San Diego in 2006, and has held residential fellowships at the Brookings Institution in Washington, D.C. and Princeton University’s Niehaus Center for Globalization and Governance. Her first book, The Pseudo-Democrat’s Dilemma: Why Election Observation Became an International Norm, was published by Cornell University Press in 2011, and has received the Chadwick F. Alger Prize for the best book on the subject of international organization and multilateralism, the best book award from the Comparative Democratization section of the American Political Science Association, and Yale’s 2012 Gustav Ranis International Book Prize. Her articles have appeared in the American Journal of Political Science, the ANNALS of the American Academy of Political and Social Sciences, the British Journal of Political Science, Comparative Political Studies, International Organization, The Journal of Politics, Perspectives on Politics, Political Analysis, and World Politics